Warrington, 27 June 2017 – Leading channel services group, Synaxon, has declared its 2017 Member Conference, which took place recently at Heathrow, a huge and resounding success and is promising even more for next year.

The group welcomed more than 400 members and representatives of supplier partners to the Park Inn by Radisson to hear leading industry figures and special guest speaker, B.J Cunningham, and to hold one-to-one meeting with their contacts.

The latter feature was particularly successful, said Derek Jones, Managing Director of Synaxon UK. “The 2017 Conference was a phenomenal success and the Conversation Starter meetings were spectacularly popular. The feedback from our sponsors and members on those sessions has been stunning. A lot of our partners and members made important contacts and did a great deal of useful business over the two days.”

John Carter, Managing Director of DMSL, which was at the event promoting its new channel programme aimed at recruiting partners for BT, agreed. “It was a great event. BT were very impressed by the quality and opportunities to engage with Synaxon Partners. Many resellers engaged with our new Broadband and Phones Programme. We even had orders for BT mobile phones being placed on the day by resellers.”

Over 750 formal meetings were staged and many more informal gatherings also took place during the networking phases of the programme.

Members also benefited. Keith Williams, Director of Personal Computer Clinic (PCC), said: “It was really productive. I certainly made a lot of new contacts and took away some new ideas. I think everyone who was there had a good time and was inspired by the positive energy and dynamism of the whole event and the Synaxon community.”

PCC was one of six companies to be presented with a Synaxon Recognition award at the Gala Dinner, which was sponsored by Ingram Micro, on the first evening of the conference.

The winners of this year’s awards were:

Des Auld received the Special Recognition Award having been an active member and supporter of Synaxon since the group was established in the UK more than eight years ago.  Auld is an industry veteran of more than 35 years and is retiring at the end of the year.

Other major sponsors for this year’s conference included Autotask, BT in association with DMSL, Sage, and Terra. Speakers from all four companies delivered keynotes.

The day’s presentations finished with a rousing and inspiring talk on what it takes to make a business successful by B.J. Cunningham, entrepreneur and founder of the iconoclastic Death Cigarettes brand.

Jones said: “I want to thank all the sponsors, suppliers and members who supported this year’s event. The 2017 Conference was a huge hit and we’re thrilled for our 45 sponsors and suppliers, but even more delighted for the members who got so much out of it. Coming on top of the many other benefits they receive; the conference is the icing on the cake and I’d urge all members to come and join us next year.”

The date and location for the next year’s event has not yet been set, but Jones wants to make it even better. “This year set the bar even higher, but we want to carry on making the conference even better and more useful for everyone involved. It has now unquestionably become one of the channel’s major networking events of the year. Everyone who came this year wants to come again in 2018 – and to get more involved and engaged with Synaxon UK. By the time we start preparing for the next conference, Synaxon UK will be bigger, stronger and even more of a positive influence on the UK channel.”

Picture: Delegates at the conference. 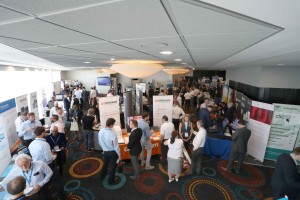 How to become an AWS Well-Architected MSP

How to become an AWS Well-Architected MSPSource: CRN

Unexpected items in the bagging area: The truth about biodegradable bags

Unexpected items in the bagging area: The truth about biodegradable bagsSource: PCR

Collaboration and the state of the supply chain

Collaboration and the state of the supply chainSource: PCR

Is the public internet good enough to support cloud services?

Former Dell Business Manager’s key goal will be to emphasise the value that Tech Data delivers to customers across Print & Supplies Basingstoke, 10 February 2020 – Tech Data (Nasdaq: TECD) has announced the appointment of Chris Bates as Business Unit Manager for Print and Supplies. He takes the reins from Stephen Martin, who has […]