Telford, 14 March 2017 – Twenty-five members of staff from Telford-based Entanet will be competing in the Midlands Tough Mudder Half challenge (https://toughmudder.co.uk/events/2017-midlands-half) to raise money for Sands (the stillbirth and neonatal death charity) this coming May.

The mud-run involves the whole team tackling a five-mile, 13-obstacle course involving a tricky combination of hills, woodlands, water and tons and tons of mud. It takes place on Saturday 13 May 2017 at Belvoir Castle in Leicestershire.

Sally Littlefair, Marketing Executive at the company, championed the challenge internally as a way of raising money for a great cause and to promote team working. There are members of staff from almost every part of the company in the team of 25.

Sally said: “We’ve chosen Sands as our nominated charity because they do vital work in supporting bereaved families after the death of a child. The UK has one of the highest stillbirth rates in the developed world and by raising awareness of the charity, we will hopefully do our bit to change that. Getting everyone around the course will require a lot of teamwork and determination – and we’ve hopefully got plenty enough of both to see us through. We’ve had a lot of support from businesses across Shropshire and we’re extremely thankful to those that have donated prizes, space and their time to support our fundraising events. ”

Entanet has a history of supporting Midlands-based children’s charities and the team is aiming to raise £6,000 for the Birmingham branch of Sands. As well as competing in the Tough Mudder Half in May, Entanet will be holding several fundraising days in the office over the approaching weeks. These kicked off at the end of February with a goodies sale, baby photo quiz and casual dress day – see https://twitter.com/entanet).

Anyone wishing to support the team’s fundraising can do so via their Justgiving page at https://www.justgiving.com/fundraising/teamenta.

Entanet is one of the UK’s leading providers of broadband and connectivity services. The firm employs just over 100 people at its office at Stafford Park in Telford.

Picture (click to open, click again to download and save): The Entanet Tough Mudder team are aiming to raise at least £6,000 for the Sands stillbirth and neonatal death charity. 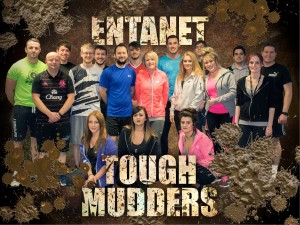